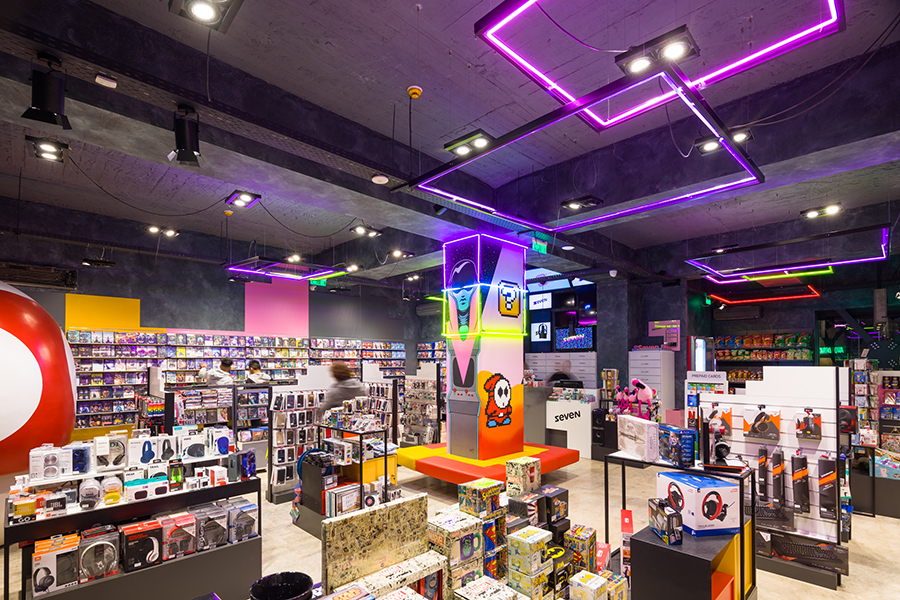 The requested need for the rebranding of the Seven Spot identity came from the observation that modern society and especially the new generation has developed means of recreation intricately linked to technology. The basic challenge was to create a physical space of socialization for the youth which would appeal to them just like a digital space. The decade of the 1980’s served as a source of inspiration. The arcades, the bright, neon colours, the graphics and the general philosophy and aesthetics of the era were utilized as stimuli that impress and give the sense of the unexpected.

The facade and the coherence between the exterior and interior experience were a decisive element of the design proposal. The storefront is no more a conventional space for product display but acts as a window to the unique experience and aesthetics of the interior. The interior spaces give the impression of a dystopian industrial virtual environment of the gaming world, with bare walls and exposed electrical infrastructure.

The building is divided into 5 zones - the retail and rental area, the Snack Bar, the kids gaming area, the screen room, and the hangout zone. The functional organisation of multiple uses was a primary objective of the design. The stairwell, decorated with street art installations and with distinctive ambient lighting, serves as a connection between the different functions of the building.

Particular attention was given to the furniture design. All the furniture were especially designed for each specific use and user, while special lighting scenarios alter the perception of the space. With attention to detail, the original concept was transformed into a space that celebrates digital gaming, entertainment and socialization.