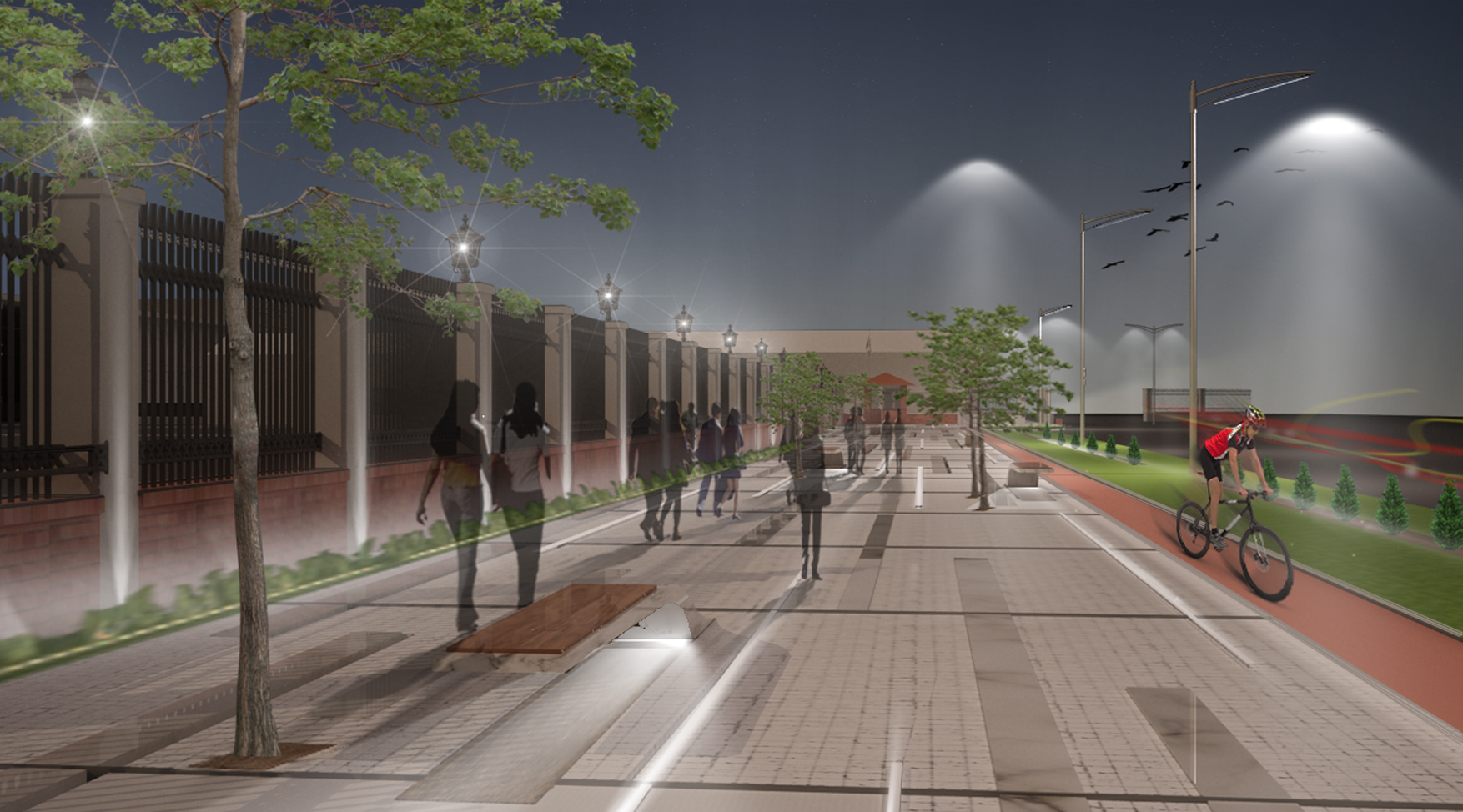 The study area is located within the THessaloniki Port of Thessaloniki. The project is dealing with two zones which attempt to connect, the other pedestrianized areas of the port while upgrading unused spaces within listed building (passenger port station). With this proposal the project area attempts to associate the pedestrian area of the first pier creating and a relaxing “pedestrian path” connecting the main gate of the port with ware house complexes and the port station. The two zones 1650tm and 2760sqm respectively, are located at the entrance to the central gate of the port, while the second area is located further south, in front of the listed building the port in between existing warehouses in the harbor

THE AREA OF CENTRAL GATE
The architectural proposal aims to upgrade the central gate of the port to a nice pedestrian walking area “strip” in front of the central gate of the port. A key element is the absence vertical construction elements (including lighting) in order for the passengers to have a clear view of the historic listed building passenger port station. The proposal aim is to protect pedestrians from transit vehicles creating a plain green zone in between, while offering a nice passage to the plaza in front of the port station. The linearity is a key concept element and it is emphasized by luminant strips on the floor in combination with marbles strips in a stone block mosaic floor. The materials suggested in order to achieve maximum absorbency of soil managing successfully drainage problems of the area. Led lighting is proposed to all lighting sources and the required energy covered by photovoltaic arrays on rooftops of warehouses in the port.

AREA SQUARE
The proposal for the new square aims to create a new pole of attraction alongside with the first promenart of the port, featuring relaxing pedestrians stops, and entertainment areas with special emphasis to thermal comfort of the user. Note that this space will be quite useful in the summer months while the movement of the passenger terminal is relatively increased. The project was formed taking into consideration bioclimatic studies of the area, exploiting the areas shaded and identifying protected from the wind areas where uses need more controlled environment. The strong element of water will improve comfort conditions in summer. The entire area of the square is divided by a linear channel of running water creates cooling and upgrades aesthetics of the space. New uses of the square are: outdoor exhibition space, recreational areas with fixed seating, outdoor amphitheater and open spaces for events-gatherings etc. The pedestrian enters the square through the sidewalk of the gate. In the northern part of the square an outdoor exhibition space with 4 small canopies of degraded storage containers is proposed. On the other side fixed seating together with planting strips is proposed for relaxation area. These constructions of metal beams and wooden planks are developed and the level of the ground, recalling the earlier existence of railways within the port. Further to the south there is an outdoor theater with 50 tiers of seats, which is placed in a protected area with shadow and less wind. The materials of the square re carefully chosen for their bioclimatic specifications. The cold stone block and a mixture of stabilized soil using almost in all the square surface in order to control issues of drainages waters and to control heat reflection from the ground. At the square the green element is quite apparent proposed trees and shrubs within the verges provide shading and cooling at the maximum exposed sun areas